Known as the fishing capital of Costa Rica, Quepos offer direct access to the most fertile fishing grounds in the country, making fishing Quepos Costa Rica a hotspot like no other. Quepos is an easy destination to get to, only 2.5 hours by car from the SJO international airport, or 20 minutes by plane. With endless adventure activities and tons of wildlife, this area is perfect for families, guy groups, honeymooners, anniversaries and offers something for everyone. Quepos and nearby Manuel Antonio offer the best of the both worlds: some of the most beautiful beaches in the world and world class sportfishing out of Costa Rica’s newest and most conveniently located marina, Pez Vela.

Peak season for Seamount/FADS fishing is from April – December.

What sets Quepos apart from other fishing destinations in Costa Rica?

The fishing here is great year round and the location offers a diverse option of fishing styles you can enjoy. Whether you are looking for an overnight trip to the famed seamounts for Marlin, a day trip chasing sailfish and other pelagic species, inshore for roosters and cuberas or something totally unique like fly fishing on the Savegre River, there is a bit of everything.

The reason Quepos is arguably the best fishing destinations in Costa Rica is because of the location as it relates to the best fishing grounds and sea floor in Costa Rica. If you look at the wind maps and current charts, you will see the central pacific area of Costa Rica offers slick calm sea conditions and perfect currents to hold pelagic species as well as inshore species year round. Our average run time to the fishing grounds is 45 minutes to 1.5 hours unlike other parts of the world where it takes ours and sometimes days to get to the fishing action.

Interested in and Offshore or Inshore Fishing Trip in Quepos?

You have the world famous Manuel Antonio National Park 10 minutes away along with beautiful Espadilla Beach which is a pristine white sand beach. In addition the beaches and the parks, there is a never-ending list of adventure (zip line, white water rafting, ATV and horseback riding), jungle and wildlife activities (Manuel Antonio National Park, Tocori Waterfalls, Damas Island Mangrove, snorkeling, Carara National Park and much much more) that you can do as well.

Our lodging options range from low priced budget hotels to 5-star luxury resorts in the nearby Manuel Antonio. We also have great availability of condos and luxury rentals that offer alternative options to the traditional hotel setting.

We can help you organize your complete trip to Costa Rica, including ground transfers, lodging, and tours like a visit to Manuel Antonio National Park.

Get a Free Quote 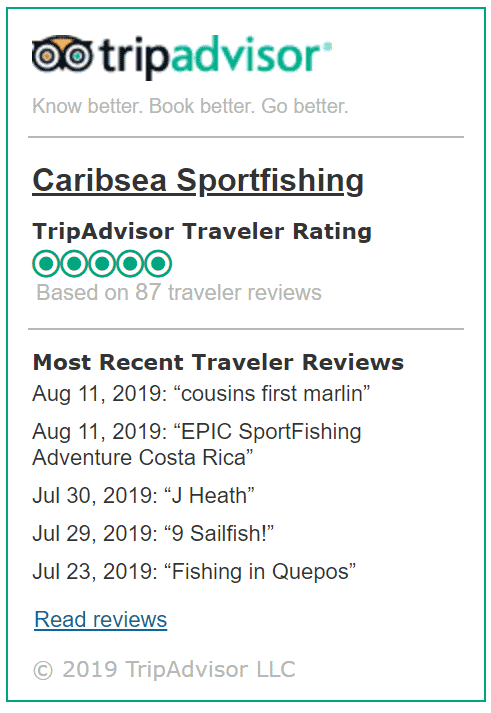